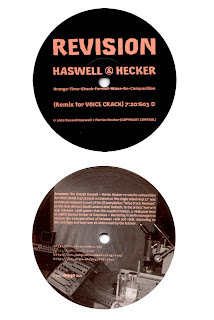 Side A: Orange-Time-Shock-Format-Wave-Re-Composition (Remix for VOICE CRACK)

The first and till now the only collaboration between Extreme Computer Music Artists Russell Haswell & Florian Hecker.
Possibly the first record to sound very similar when played on either 33 or 45 rpm, or in fact, any speed!
Edition of 500.

Erratum text from the back label:

The Russell Haswell + Florian Hecker re-mix/recomposition for VOICE CRACK (1972/2002) contained on this single-sided vinyl 12" was previously released as part of the CD compilation "Voice Crack: Remixed" on the now defunct South London Label, Ambush.
To the artists' horror it was released -18dB quieter than the supplied master, a +8dB peak level at 0dBFS! Rashad Becker at Dubplates + Mastering in Berlin managed to restore the intended effect of between +6dB and +8dB, depending on the cartridge and tone-arm et cetera used by the listener.